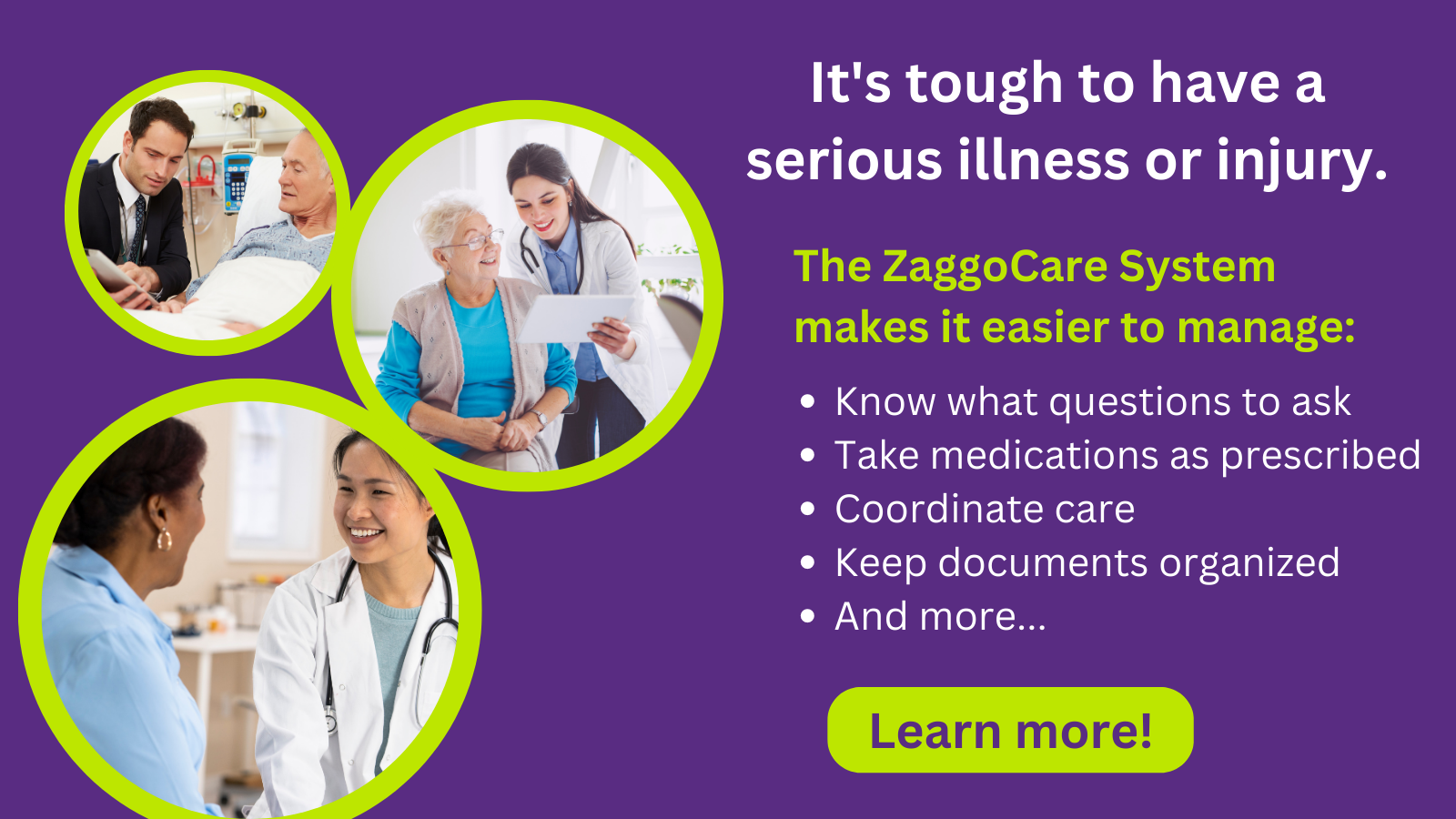 It’s every patient’s worst nightmare – your surgeon makes a mistake, putting you in danger. The doctor performs the wrong operation or operates on the wrong body part. Or your doctor leaves something inside your body, gives you the wrong medication, or leaves in the middle of your procedure! Learn more about these surgical dangers to reduce your risk of potentially serious problems.

Some surgical dangers are called Never Events – categorized as serious and costly errors that are largely preventable and therefore should never happen.

What is a surgical Never Event?

According to a 2016 report by the National Quality Forum List of Serious Reportable Events, surgical Never Events are as follows: 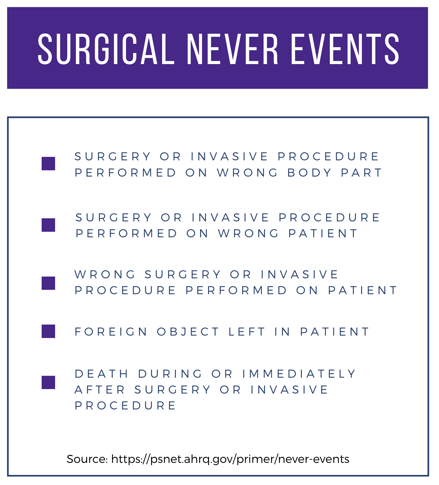 How common are Never Events?

One study of malpractice settlements estimates that there were over 80,000 Never Events in US hospitals in 20 years (1990-2010). The authors evaluated data from paid settlements, only counting cases in which a patient successfully received a settlement payment.

Since not all harmed patients file malpractice claims, and not all who file a claim receive a settlement, it is logical to assume that there are likely many more of these events occurring every year.

Furthermore, these researchers estimate that in the US, surgeons, as a group: Additionally, a study examined the frequency of wrong-site surgeries at Pennsylvania hospitals between 2015-2019. Researchers found that there was an average of 1.42 wrong-site surgery events per week in Pennsylvania. Furthermore, 76% of these events contributed to, or caused, temporary or permanent patient harm. Although this review only included Pennsylvania hospitals, I think we can assume that hospitals in other states have similar rates of these types of events.

Although it’s impossible to know the exact number of surgical Never Events, when it happens to you or a loved one it can be devastating.

How dangerous are surgical Never Events?

Fortunately, the effects of these surgical mistakes are generally not fatal. However, they did find that patients frequently suffer harm:

How can doctors and hospitals avoid Never Events? Experts believe that closely monitoring Never Events will help in the development of effective ways to eliminate them. Additionally, creating an environment that encourages accurate reporting will move the efforts forward.

Although there is plenty of room for improvement, many, but by no means all, hospitals have programs in place to reduce the risk of these types of mistakes. Steps taken include:

What can you do to reduce your risk of Never Events?

I suggest the following steps to reduce your risk of surgical dangers and Never Events:

What should hospitals do if a Never Event occurs?

A study of more than 275 surgeries during 2013 and 2014 at Massachusetts General Hospital (MGH) found an alarming number of medication problems. Researchers observed the administration of medications during what is called the “perioperative period” – the time immediately before, during and right after a surgery. Their findings indicate a widespread problem. They found:

What kinds of errors did researchers identify?

The most commonly observed errors were:

How serious were these mistakes?

Since all mistakes are not of equal consequence, the researchers classified the mistakes by severity:

Why do surgeries have medication issues?

In a 2015 article, Dr. Karen Nanji provides several reasons for this high number of medication issues, including:

What can you do about medication errors during the perioperative period? Did you know that some surgeons simultaneously work on 2 or 3 patients, going between operating rooms? There are two categories for this practice:

Each hospital decides if, and how, they will allow overlapping and/or simultaneous procedures. And, in general, surgeons are not required to notify patients about their plans for either practice.

Is this practice dangerous?

There is less concern about overlapping surgeries since the primary surgeon performs each actual procedure itself, with trainees handling non-critical routine tasks.

On the other hand, there are several potential problems with simultaneous or concurrent surgeries:

As you may know, Massachusetts General Hospital (MGH) is considered one of the best hospitals in the country. Yet, according to a Boston Globe article, in February, 2022, MGH agreed to pay $14.6 million to settle a federal lawsuit related to this topic. The lawsuit alleged that MGH fraudulently billed Medicare for surgeries that were performed by trainees when supervisor surgeons worked in other operating rooms. Importantly, Medicare requires surgeons to be present for at least the critical parts of operations, although some overlapping for non-critical steps is allowed.

This lawsuit was based on allegations made by Dr. Lisa Wollman, an MGH anesthesiologist who stated that at least 5 orthopedic surgeons at MGH regularly kept patients under anesthesia longer than medically necessary (sometimes an hour or more) because the surgeons were working in two operating rooms. Furthermore, she claimed the surgeons failed to designate a backup surgeon in case the trainees required immediate help.

Importantly, this is the 3rd time since 2019 that MGH agreed to pay millions for claims associated with concurrent surgeries.

Furthermore, according to a Boston Globe Spotlight Team series published in 2015, MGH gave orthopedic surgeons financial incentives to perform more procedures, and a handful of doctors regularly scheduled concurrent surgeries to take advantage of this policy.

MGH leaders defend the practice stating it’s the best way to use the most talented surgeons, with surgical trainees performing routine tasks, such as closing surgical wounds, while experienced surgeons operate on other patients. Nonetheless, the reports inspired a national debate in the medical community, a congressional inquiry, and regulatory changes in Massachusetts.

What changes is MGH making?

As part of the latest settlement, surgeons at all hospitals in the Mass General Brigham network must inform patients if they plan to overlap operations with those of other patients.

Unsurprisingly, Dr. Wollman reports that the surgeons she complained about never told patients that they planned on performing concurrent surgeries.

Concurrent surgeries are not limited to MGH.

According to a MedPage Today article, similar cases have been filed against hospitals in Arizona, Pennsylvania, and New York. However, it’s unclear how common this practice is. But, among hospitals who responded to a 2016 survey by the Senate Finance Committee, 33% of surgeries performed between January 2015 and March 2016 had some degree of overlap.

What can you do about simultaneous surgeries?

I suggest you consider the following:

Clearly, if your surgery is an emergency, or there are no other qualified surgeons nearby, you may not have a choice.

To further reduce your risk of surgical dangers, and to improve your likelihood of a positive outcome, read these posts: 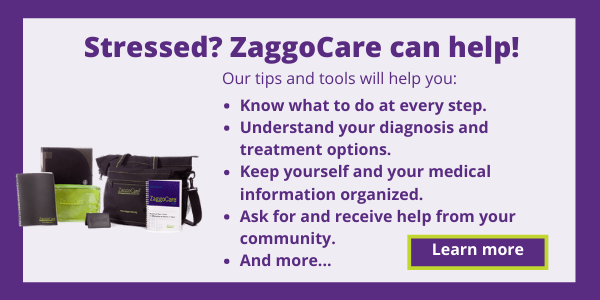